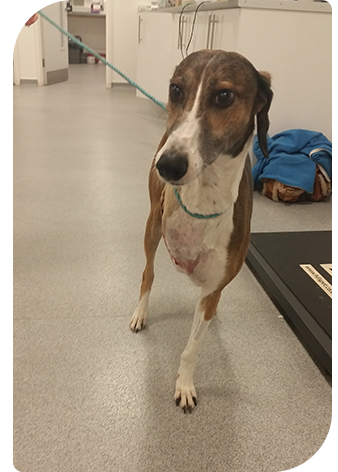 Jess was brought to The Vet with a mild lameness in her right front leg. She initially responded well to medical treatment with an anti-inflammatory pain killer. Only a few days later after stopping the pain killers, Jess unfortunately bounded over a garden step and caught her leg. Jess soon became progressively more lame and painful on her leg. The decision to radiograph the leg taken, so we could further investigate her lameness.

Jess was diagnosed with an osteosarcoma (bone tumour) to her humerus bone in her front right leg. This tumour type can be aggressive and spread quickly, surgery to remove the tumour is the only possible curative therapy. Jess’s owner gave us the go ahead to act quickly and do all we can to save Jess. Her surgery took place the very next day.
Two and a half hours in surgery, and the team removed Jess’ limb to remove the tumour and any cancer that spread to further tissues in the area. Within a few hours Jess was up and about walking on her three legs.

Thanks to Jesse’s owner for electing for surgery and some quick surgical planning Jess stands a strong fighting chance in her cancer battle.